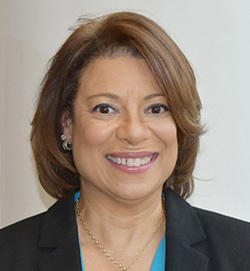 Karen M. Hardwick is Senior Vice President and General Counsel for WGL Holdings, Inc. and Washington Gas Light Company. She is responsible for managing and directing the company’s legal strategy and supervising the attorney staff and the corporate secretary.

Ms. Hardwick brings to her current position 30 years of experience in the public, private, and nonprofit sectors. She began her career at Hogan & Hartson LLP (Now Hogan Lovells LLP). During her 18 years with the firm, Ms. Hardwick rose to equity partner and managed commercial litigation and complex investigations for technology companies, regulated utilities, commercial real estate developers, and insurers.

Prior to joining WGL in October 2018, Ms. Hardwick served as General Counsel for the University of the District of Columbia (UDC), where as a member of the president’s cabinet she helped lead the ongoing transformation of the university, rebuilt the legal operations to enhance service delivery, managed the university’s corporate governance, and directed outside counsel in high stakes litigation.

Before her role at UDC, Ms. Hardwick served as general counsel to Annapolis, Maryland, a municipal corporation, and managed all of the city’s legal affairs, which involved complex litigation, debt issuances, design and construction of major capital projects, and corporate governance. Ms. Hardwick also worked as General Counsel and Executive Vice President of the Anacostia Waterfront Corporation, leading the legal negotiation of public and private real estate development projects near the Washington National’s Stadium and at the Wharf on the Southwest Waterfront.

Ms. Hardwick is active in the community through volunteerism and contributing her time and management skills to several non-profits. Since 2006, she has served as Vice President of the Washing Children’s Foundation, and served in leadership roles on the boards of organizations including the National Capital Revitalization Corporation, the District of Columbia Chamber of Commerce, and Leadership Greater Washington.

A native Washingtonian, Ms. Hardwick is a graduate of the University of Virginia, where she received a Bachelor of Science Engineering, and earned a law degree from Harvard Law School. She and her husband reside in Washington, DC and Annapolis, MD.